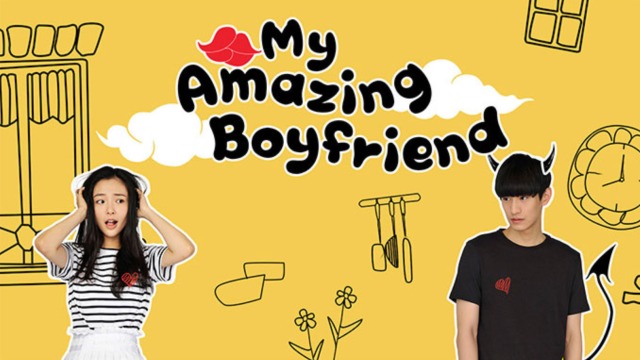 Who would have thought that the first entry for 2016 in my best rom-com list would be a Chinese drama – albeit one with a Korean male lead. Yes, I’m talking about My Amazing Boyfriend. It’s a fun rom-com action fantasy about an actress who gets mixed up with a handsome 400-year-old man with superpowers.

My Amazing Boyfriend
A hilarious rom-com action fantasy about an unlucky actress, Tian Jing Zhi (played by Wu Qian), who awakens a mysterious 400-year old man with superpowers. Bound by blood ties to her, he moves in with the initially unwilling, rather volatile and very expressive Jing Zhi, looking for his mortal enemy.
Wait a moment … an actress and a mysterious handsome man with superpowers who appears to be in his 20s but is actually hundreds of years old? Doesn’t this sound familiar? Yes, this is the Chinese drama “inspired” by My Love from the Star. But no worries: Even though there are some similarities, this is clearly not a remake. In fact, it is fun to see how the writer comes up with a different story given the similar premise. The drama is also different in tone – more crazy over-the-top comedy chunks (balanced by some serious action/thriller aspects) and less heart-wrenching melo parts.
There are 28 episodes but each episode is only 45 minutes long. So in the end, timewise it’s more like a 21-episode K-drama. The episodes’ intro section (about one and a half minutes long) gives away too much, so I highly recommend skipping it. Other drawbacks: Sometimes the show feels a little heavy-handed (e.g. there’s an episode consisting almost only of flashbacks) and the ending is disappointing. And the intentional over-acting comes with a price – we are more amused but we are also less emotionally engaged. Plus, there is a change of tone and focus two-thirds of the way in from a mix of rom-com and thriller with a touch of melo vibe to mostly thriller. Some people might like that. Me – not so much. Good.
MGTV (China). Written by Shui Qian-Mo.
.

Other images: The low-res reproductions of promotional posters on this website are used in the context of critical commentary on the TV shows discussed. For copyright information please contact the distributor of the television drama / TV network as noted on the last line of each entry.